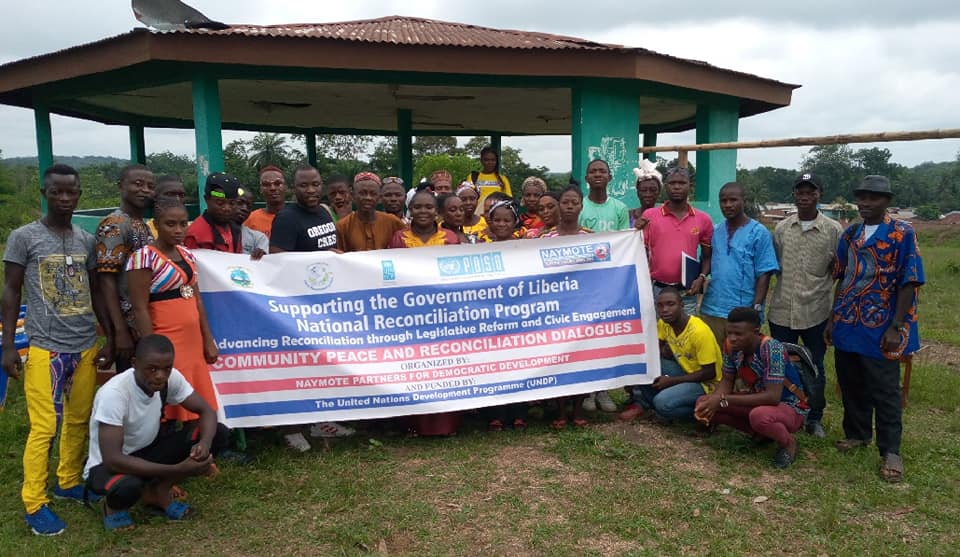 The fundamental objective of the community peace and reconciliation dialogues is to provide local leaders and community residents the opportunity to reflect and discuss the history and sources of conflict in their communities, identify triggers of conflict and propose recommendations to resolve/ mitigate conflict triggers.

Since the inception of the project in April 2019, eighteen (18) community peace and reconciliation dialogues have been conducted by the institution across the project locations. Over 700 stakeholders including Superintendents, commissioners, chiefs, teachers, representatives from political institutions, Ministry of Internal Affairs, CSOs, CBOs, police officers, immigration officers, youth and women leaders, physically challenged, community leaders and residents participated in the dialogues.

The dialogues have been great and rewarding, it provided stakeholders’ broad knowledge about the essence of reconciliation and benefits of reconciling. Participants reflected and discussed the history and sources of conflict in their communities, identified triggers of conflict and proposed recommendations for conflict triggers.

Some issues highlighted by participants as triggers of conflict during the dialogue included: Corruption in government, hardship/ poverty, high increase in prices of goods and basic commodities, community land disputes, division among national and local leaders, drugs abuse, high crime and unemployment rate, political differences/ party politics, partial justice, sexual abuse/ rape, bribery of law enforcement officers, poor health system (lack of support to health facilities), teenage pregnancy/ prostitution, lack of logistical support and compensation for police officers, bad labor practices by concession companies and private entities, poor implementation of existing laws. Others stressed that the government has abandoned them, the government not living up to their expectations, and a lot of their local leaders and civil servants not receiving salaries on time.

“Government made a lot of promises to us before the elections, which convinced us to vote them into power but it’s sad that government cannot fulfill their promises”. Othello Cotowor, President of the Bassa Youth Caucus, Grand Bassa County

“We are suffering, prices in goods and commodities are escalating, the majority of our leaders are not receiving salaries from government anymore. We don’t want to get back from mattress to the mat” Women Leader, Clay District, Bomi County

At the end of the dialogues, participants proposed several recommendations that they believe will help mitigate conflict within their respective localities. They recommended the following: Citizens should desist from the dissemination of misinformation, the government should provide adequate financial and logistical support for police officers which will help police officers to render impartial justice and avoid those accepting bribes. They mentioned that in order to reduce/ mitigate crime rate and drugs abuse, government should increase security at borders, reform drugs law to make offense non-billable, establish rehabilitation centers for young people involve in crime and drugs abuse, provide livelihood skills training for them, reintroduce community watch forums in communities and empower local leaders to institute vigorous monitoring within their localities and report drugs / crime cases. As per county and community land dispute, participants recommended that government should carry out a nationwide survey to settle boundary land disputes, local leaders should fully participate within the buying and selling of land within their localities and there should be an increased awareness on tribal certificate as well as the land rights act.

Citizens also proposed that in order to mitigate corruption, the government should suspend/ dismiss government officials who are corrupt and prosecute them according to state laws. To reduce hardship/ mitigate poverty, the government should provide salaries for their workers, specifically civil servants and local leaders on time, initiate livelihood skills training for women and youth, fully support agriculture programs/ projects, attract investors interested in agriculture to invest in Liberia by opening large agriculture industries and farms. As per bad labor practices exhibited by concession companies, the government should review labor law to suit current reality and establish a wage board.

For the unfair distribution of wealth, citizens proposed that government should revise salary structure for members of the legislature and reduce their salary. Also, in order to improve the health system, the government should provide full support to medical facilities, empower health practitioners through training, and citizens should petition their lawmakers to increase budgetary allocation towards the health sector. Additionally, for division among political leaders, participants recommended that elders, religious and traditional leaders should facilitate a local reconciliation dialogue/ meeting with political leaders and resolve disputes.