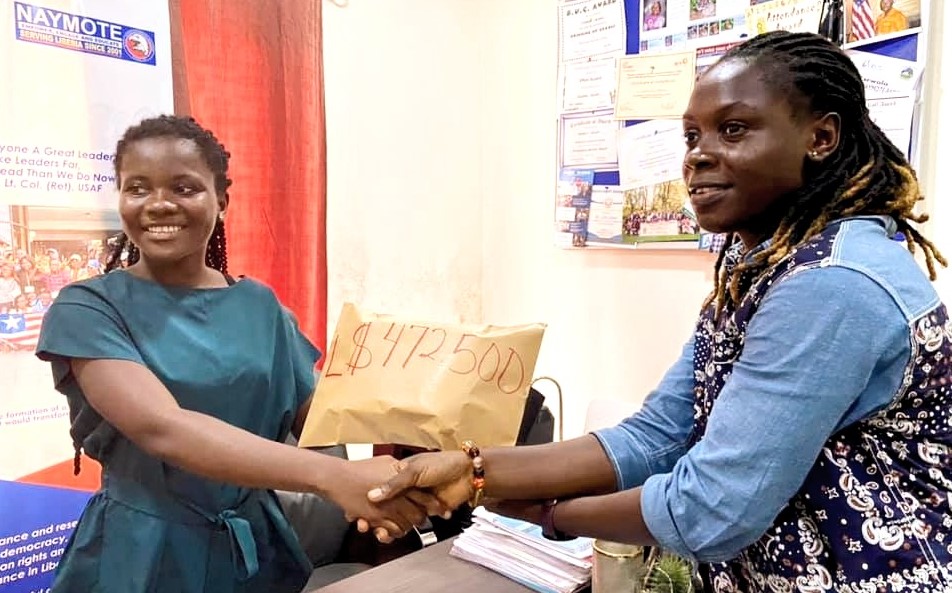 Naymote Partners for Democratic Development has made available L$472,500.00 to Alumni of Cohort 7 of the Young Political Leadership School Africa to support increase youth participation to the December 8, 2020 electoral process. The nonpartisan voter mobilization and civic education initiative for young voters from across the four counties aims to increase young voter turnout, and promote peaceful electoral process, the awareness is going to last for five days beginning December 2. 80 Alumni will use the fund to lead a non-violent election campaign, undertake grassroot civic engagement events across Montserrado, Margibi, Grand Bassa and Bomi Counties educating young voters about the voting process, where to vote and how to vote. The trained Alumni will use their community organizing skill gained from the YPLS Africa training to mobilize increase youth turnout during the December 8 special senatorial election.
Speaking to Alumni during the donation process, Alpha Faith Kemokia, the Program Coordinator of the Young Political Leadership School Africa said this was her institution contribution toward Liberia’s democratic enhancement and helping Alumni actively involved in supporting the sustenance of democracy and youth participation in political processes. She said Alumni are expected to reach thousands of young voters, using innovative grassroots door-to-door engagements, taking bus rides (the institution’s 2 buses will undertake mobile awareness across communities, entertainment centers, marketplaces with assigned volunteers). Alumni will send text messages, make phone calls to friends, and use community radio stations for it Get Out To Vote Campaign. They are expected to motivate and inspire young people to turnout and make a difference by voting wisely and making the best choice for the improvement of the Liberian Senate, realizing that to have a good senator, you should be a good voter.
Wellay T. Baar, the Cohort 7 Class President said she was thrilled by the donation and promised that regardless of the political differences of the class they are going to use their diversity to promote non-violent campaign, increase young people participation and support this national effort in substance of Liberia peace and democracy. She said the class has some of the best young political leaders in the country and with the support they are going to reach to hard to reach communities and get young people out to vote.
The Young Political Leadership School Africa (YPLS Africa) is a flagship program of Naymote Partners for Democratic Development. The overarching goal of YPLS Africa is to contribute to the formation of a new generation of character-driven political leaders that would be accountable, responsive, and accessible to the needs and interests of their citizens and help to shape the future of their respective countries in the positive direction. https://www.yplsa.org/. This intervention is supported through a grant support from Open Society Initiative for West Africa and National Endowment for Democracy.
National Endowment for Democracy
Open Society Initiative for West Africa (OSIWA)
U.S. Embassy Monrovia, Liberia
UK in Liberia – British Embassy, Monrovia
USAID – US Agency for International Development
United Nations Development Programme – UNDP
UNDP Liberia
Embassy of Sweden in Monrovia
European Commission
Previous PostNEC Unveils Symbols for the 2020 ReferendumNext PostLiberia 2020-2021 Draft Budget
0Shares