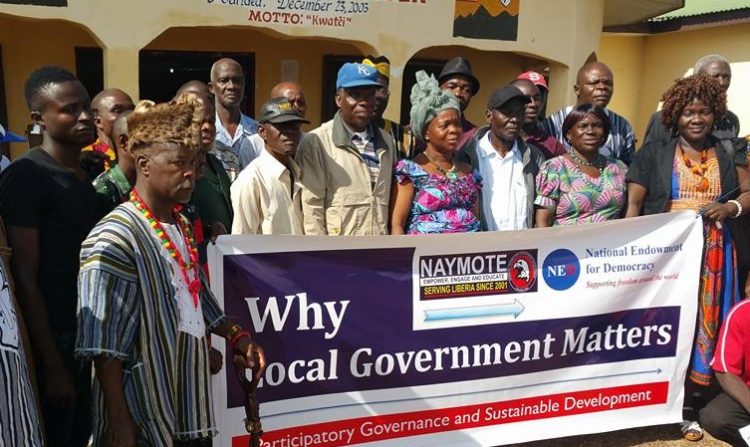 Are you aware that the Margibi County Service Center collected over 2 million Liberian Dollars just in three months, and that over 4 million United States dollars was used for county development projects through the County Development Fund/Social Development Fund in Margibi County 2012/2013 to 2015/2016? YES! This is why local government matters.

Our institution NAYMOTE held the second local government capacity building trainings for 31 local leaders including commissioners and chiefs from across Margibi County. The training aimed at increasing the leadership skills of local leaders, deepened their understanding of the usages of the county service center, assessed the impact of the project management committee at the district levels and learned how local leaders engage the media to ensure participatory decision-making, planning and promote grassroots development in Margibi County.

Speakers at the event included, the County Inspector, Chairman of the Project Management Committee, Coordinator of the Margibi County Service Center, the Director of the Liberia News Agency in Margibi County, etc. Speaking during the training, the Margibi County Service Center Coordinator, Sam T. Artis, said the center collected LD$2,175,480.00 for services provided during the period of three months. Birth certificate, business registration and land deed topped the list of services provided by the center. The county service center is part of the national decentralization process to bring services closer to the people reflecting the same value and cost in Monrovia.

A detailed PowerPoint presentation with pictures of the construction of schools, market buildings, health centers and roads as interventions of development projects in the county through county and social development funds costing US$4,060,287.77 during the period 2012/2013 to 2015/2016.

Also speaking at the program, NAYMOTE’s Executive Director, Eddie Jarwolo, told participants that local government is important to the development of Liberia, especially as the country move toward decentralization. He said local leaders directly impact the daily lives of their citizens but it is complicated for them to effectively deliver the needed services without the required skills. It is from this background that NAYMOTE has embarked on this initiative, which seeks to support the capacity building of local leaders to have the skills and knowledge needed to ensure participatory decision-making, planning and sustainable development to contribute toward the realization of the national decentralization process.

May 5, 2022
U.S. Ambassador’s Speech at the Carl Gershman Democracy Lecture Forum in Liberia, organized by Naymote