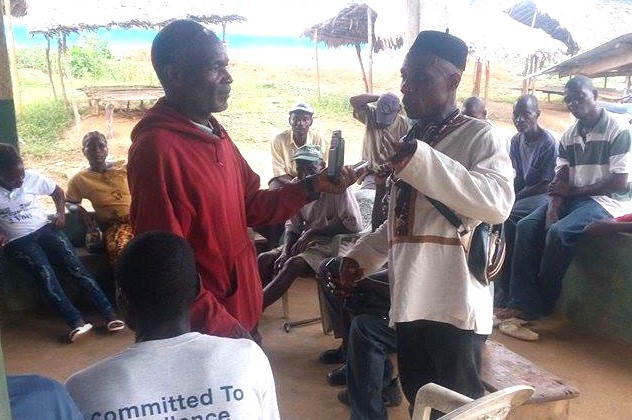 Our coffee shop discussions are being aired live and speakers include traditional leaders, NAYMOTE’s Regional Coordinator and a representative from the local National Elections Commission (NEC). The good news from the Southeastern Counties of Grand Kru, Riverge and Maryland is that citizens are turning out in mass to register while challenges with cameras are gradually being handle by the National Elections Commission. Our canvassers are reaching thousands, visiting school campuses, market places, knocking on doors and using town criers and local dialects to get the messages to the citizens, encouraging them to register and to vote. Within 14 days, our community volunteers have reached 11,200 households within 9 electoral districts in Grand Kru, Rivergee and Maryland Counties. They are mobilizing and informing citizens about the voter registration process using the Frequently Asked Questions about the Voter Registration process produced by the National Elections Commission (NEC), they are working in nine electoral districts through 12 local community based organizations.

Each canvasser is responsible to reach 8 households a day for 25 days; they are expected to reach 20,000 households in nine electoral districts across three counties in the first stage of the project. They are also visiting school campuses, and market places mobilizing bigger groups and inspiring citizens to register from February 1 to March 7, 2017.

Our project with support from UNDP through funding from the European Union and Swedish Government, is impacting the voter registration process positively, citizens are taking local ownership based on our strategy and through our radio programs reaching many people in Grand Kru, Rivergee and Maryland Counties. Our canvassing approach has been very effective reaching citizens face to face while speaking the local dialect. It is more personal and therefore more effective. It is great to assign canvassers who are similar to the door-to-door targets in the local environment.