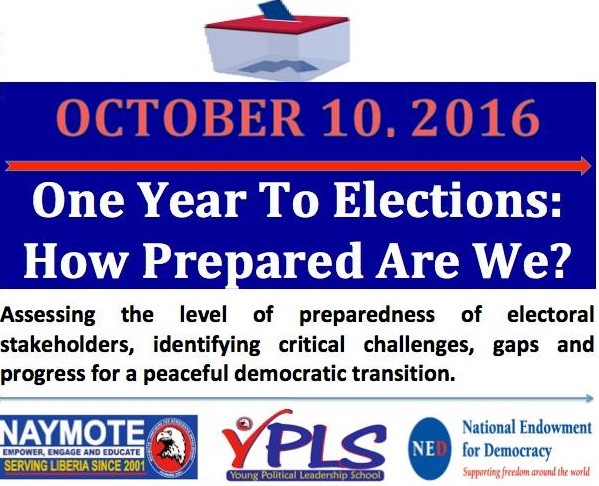 Liberia, one of Africa’s oldest country has embarked upon another milestone. The country is approaching a historic moment in its journey towards democratic advancement and development. On October 10, 2017 Liberia will conduct her Presidential and Representative elections. The 2017 elections will usher in the first post-war transfer of political administration, when President Ellen Johnson Sirleaf turns over the country’s leadership to a newly democratic elected president.

Monday, October 10, 2016 marked exactly one year from a very crucial presidential and representative elections, which will contribute towards consolidating the peace and democratic gains made over the past years. To begin addressing critical challenges in relation to Liberia’s election management process, our institution, on October 10, 2016 held a one day national multi-stakeholders dialogue on the Election Management Process at the Monrovia Christian Fellowship Church on 9th Street, Sinkor, under the theme: ‘October 10, 2016, One Year to Elections: How Prepared Are We?

The overall goal of the dialogue was to assess the level of preparedness of electoral stakeholders, identify critical challenges, gaps and progress, as well as, safeguard inclusiveness in the electoral management cycle for a peaceful democratic transition. It also provided the platform for participants to engage with stakeholders, assess critical issues pertaining our upcoming elections as well as enabled them to gain understanding about the National Elections Commission, the Security Sector, Political Parties and Civil Society strategies for election.

The dialogue featured panel discussions where experts from the National Elections Commission, Elections Coordinating Committee, Security Sector (Liberia National Police) and the Coalition of Women in Political Parties made presentations. At the end of the dialogue, participants applauded NAYMOTE for organizing the program. They believed that it definitely afforded them the opportunity to gain understanding about the progress made by the NEC, women, Security Sector, Media and Political Parties; contributing to our democratic process. In the wake of the revised electoral law, the code of conduct, increased number of political parties, the creation of the new voter’s registry, the proposed affirmative action bill (21 additional seats), and issues regarding the threshold for voter registration, as well as the departure of UNMIL, it is important to begin engaging key electoral stakeholders and election management body around their preparedness as we move closer to upcoming elections in order to adequately address the existing challenges, and shortcomings and find a way forward to ensure a smooth and democratic transition.