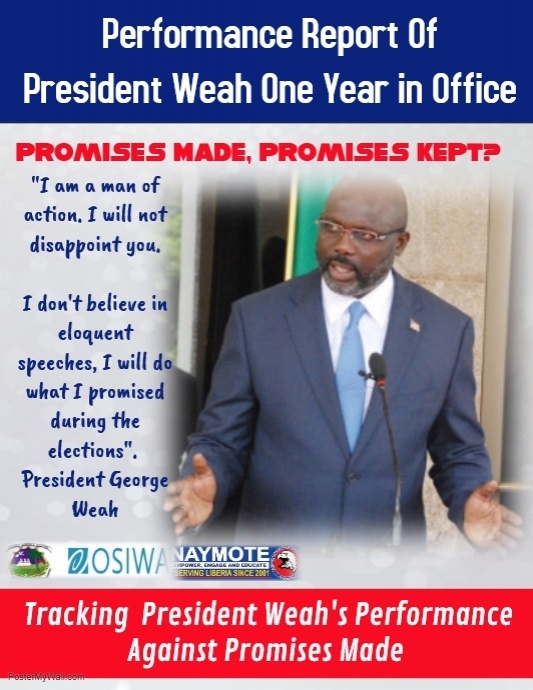 (January 29, 2019) Naymote Partners for Democratic Development releases its one year report on the President Meter Project. The President Meter is an independent monitoring tool that enables Liberians and civil society actors to evaluate the performance of President George Manneh Weah and the Coalition for Democratic Change against promises made during and after the election.

The overarching objectives of the President Meter Project are to promote democratic accountability, improve government’s performance and strengthen public service delivery. This report focuses on promises contained in the CDC’S Manifesto, Presidential Priority Projects, Campaign Speeches and Policy Statements made since President Weah inauguration on January 22, 2018.
Our institution during the one year project period tracked, documented and rated 87 promises (65 promises from the CDC Manifesto 2017 and 22 promises from campaign speeches, policy statements and presidential priority projects).

Since the ascendency of the President and his government to power, actions have been taken towards the implementation of 38 promises including 5 completed and 33 ongoing during the first year in office focusing on education, health, infrastructure, agriculture and youth development. The additional 49 promises were rated as “Not Started” or “Not Rated” due to the lack of available information to assess progress towards implementation.
The 5 completed promises include: Payment of the West African Examination Council (WAEC) fees for all students who sat the WAEC exams in 2017 across the country, Renovation of the John F. Kennedy Memorial Hospital, the passage of the Land Rights Act, Reduction of salaries for public officials under the Executive Branch of Government, and Pavement of the Doe Community Road to Clara Town.

Of these 87 promises, 10 were focused on education and training, 8 dealt with health and sanitation, 3 on gender equality, 4 on youth reorientation and empowerment, 5 on physically challenged and senior citizens, 12 focused on sustainable economic growth, 7 highlighted agriculture and forestry, 14 dealt with infrastructure development, 1 highlighted transportation, 5 on justice and human rights, 2 on reconciliation, 3 on security and national defense, 4 on decentralization of institutions and systems, 4 on accountability and anti-corruption and 5 on foreign policy and diplomatic relations.

Overall, 26 of these promises are directed toward the economy and infrastructure development. At the same time, since his inauguration, the President has highlighted in many public statements that infrastructure development, particularly the construction of roads remain the top priority of his government. However, to achieve this, it will require intensive capital investment while accessing the needed capital to make this happen remains a major challenge.

During the one year period it was observed that no tangible actions have taken place on promises around accountability and anti-corruption as well as promises on physically challenged and senior citizens.

Naymote Executive Director, Mr. Eddie D. Jarwolo believe that the President Meter Project is the best platform to promote democratic accountability and make elected officials more accessible, accountable and responsive to their constituents thereby building citizens trust in elections and democratic processes. He hopes this report will be taken in good faith and more actions will be taken by the Government to deliver on ongoing promises within the second year in office. He calls on citizens to hold their elected officials accountable to deliver on the campaign promises made during the election.

The project is supported by the Open Society Initiative for West Africa (OSIWA). Click link to download/ read the One Year Report On President Weah Performance 2019.