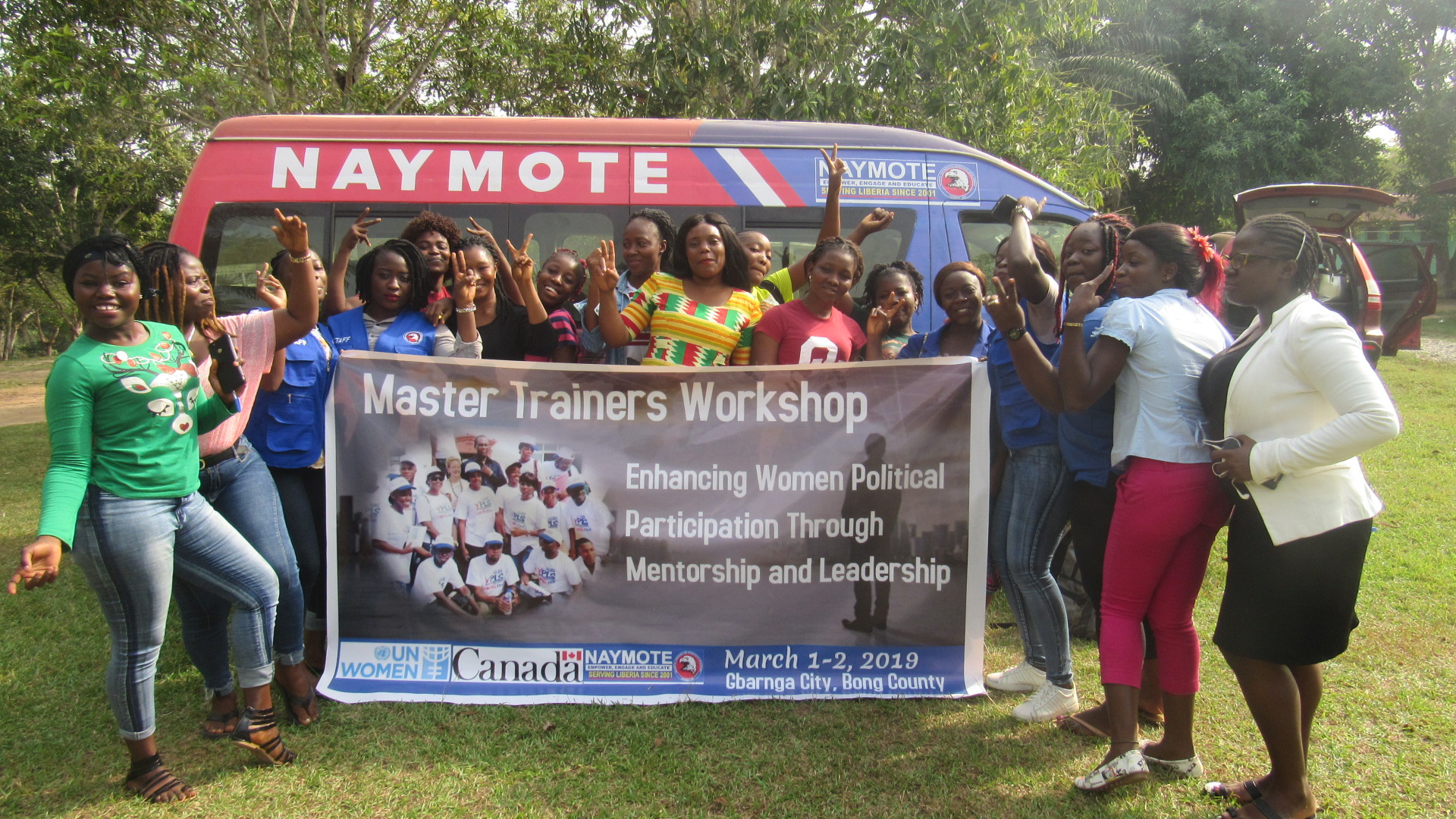 Naymote Partners for Democratic Development rollouts its Young Women Political Empowerment, Mentorship and Leadership Program with support from the government of Canada through UN Women-Liberia.

As part of the project, the institution held a two-day (March 1-2, 2019) Master Trainers Workshop at the Development Education Network Liberia (DEN-L), Gbarnga City, Bong County for 20 young women from Bong, Nimba, Margibi, Bassa and Montserrado County. Beneficiaries of the training are going to use the skills and knowledge to support the conduct of three regional workshops in Bong, Bomi and Rivergee Counties.

The master trainers workshop deepened participants civic understanding of gender equality and women’s right to political participation; leadership styles, qualities and decision-making; resource mobilization and campaign budgeting; campaign planning and setting up campaign teams; the roles and responsibilities of a campaign team and campaign manager. Participants also learned the Local Government Act of 2018 with emphasis on power and authority within the new law and its structures as well as strategy to claim a space in a  political environment and making a decision to run for public office.

Some highlights of the training included a reflective session where participants listened to the song “Man in the Mirror” by Michael Jackson. Following the reflective exercise, participants were asked how they could relate to the song reflecting on their personal lives, undertakings and the change they want to lead; many shared tears and truth telling came out from the discussion. They admitted that there was a need to do more and help those needed. Some said “I am the man in mirror; I have listened to the song before but didn’t really understand the wordings until today. I am going to be that “man in the mirror”. Participants also undertook field trips to assess issues people care about most in rural and vulnerable communities and identified key issues to support their campaign planning and messaging. Following their field trips, they were able to document lot of issues  including lack of safe drinking water, health center and schools, etc. and made a presentation during the plenary session.

The Young Women Political Empowerment, Mentorship and Leadership Program is focusing on training and mentoring 75 young women from across the 15 counties in Liberia who are ready to commit themselves full time to working in public service, making a difference in their communities, working on a campaign team in the 2020 senatorial election or the 2023 elections, and run for elected office.

The mentorship component will expose mentees to a vast network of organizations and professional women leaders. This will help them build professional relationships and alliances to start a career that will serve the public interest and make a change. Mentees will gain first-hand experience, new skills and networks that will be useful in their professional life and have a personal leadership development action plan. They will be mentored and empowered to lead with support from regional coordinators and project manager from NAYMOTE

NAYMOTE executive director, Eddie Jarwolo said the one-year program will enable mentees to build the requisite skills and networks to increase their opportunities for leadership and overcome barriers that limit women’s participation in decision-making, leadership and political affairs in Liberia. He encouraged young women to think big, if possible form a political party that will provide space and opportunity for women to contest and win because the 26 dominated men political parties are not willing to provide space for women to serve.  He said, “What is stopping you from establishing a women political party to compete with men and make a difference” if you have a political party for all women, more women could be selected in the legislature to contribute to legislations for better healthcare, better education, better laws to protect women and children as well as have better oversights for good governance.