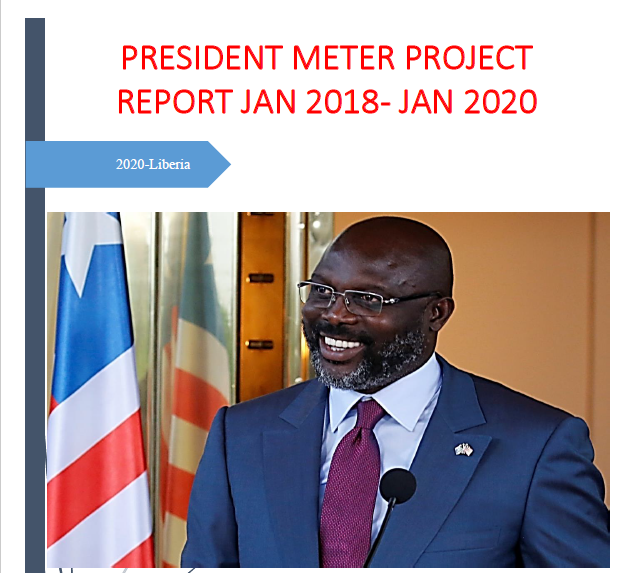 The President Meter Project seeks to monitor, track, document, rate and report on the performance of President George Weah against promises he made during and after the election as well as track the government’s development agenda from January 2018 to January 2020.  During this period, the institution tracked and rated 92 promises of which 7 promises were completed constituting (8%), 38 promises are ongoing (41%), and 47 promises (51%) have not started or not rated due to the lack of available information to assess progress made towards implementation. This tracking was undertaken against the assumption that citizens care deeply about whether their government has followed through on what it originally promised and provides citizens the tools to cut through the misinformation that so often plagues political discourse surrounding the status of government.

This project has tracked, documented and rated 92 promises (65 promises from the Coalition for Democratic Change Manifesto 2017 and 27 promises from campaign speeches, policy statements and presidential priority projects). The 7 completed promises include:

The 92 promises tracked were placed under four pillars as outlined in the CDCs Party Manifesto.

Pillar One: POWER TO THE PEOPLE, 32 promises were tracked of which 3 were completed, 15 ongoing, and 14 promises not started or not rated.

Pillar Three: SUSTAINING THE PEACE, 10 promises were tracked, 4 promises are ongoing and 6 not started or not rated.

Pillar Four: GOVERNANCE AND TRANSPARENCY, 14 promises were tracked, 4 promises are ongoing, and 10 not started or not rated.

It was observed that during the 2 years period, President George Weah’s administration, has taken no tangible actions on promises around Accountability and Anti-Corruption as well as promises on Physically Challenged and Senior Citizens; while limited efforts have been placed on Gender Equality, and Justice and Human Rights in Liberia.

The promises were categorized based on four scales as highlighted below:

Completed: This is when a promise has been confirmed to be achieved,

Ongoing: This is when the government is working toward achieving a promise, but the promise has not been fully achieved,

Not rated: This is when information is not easily accessible to verify whether an action has been taken on a promise,

Not started: This is when no concrete action has taken place in response to a given promise.

In tracking and documenting these promises, several distinct yet inter-related quantitative data monitoring tools were used. They included: extraction, verifying promises, and monitoring and tracking.

A database was established where all information generated from the various tracking tools was stored and collated. In order to ensure accuracy, information on promises tracked was triangulated using primary data source (Government official records), Non-partisan Think Tank reports, civil society reports and independent media reports, and interviews conducted with government officials. The outcome of this triangulation was also reinforced by the findings of on-site visits by NAYMOTE staff.

Through this triangulation method, data was analyzed, findings were generated, and conclusions made whether a promise could be classified as completed, ongoing, not started or not rated.

The Executive Director of the Naymote Partners for Democratic Development, Eddie Jarwolo said, the objective of the President Meter is to promote democratic accountability, improve government’s performance and strengthen public service delivery. He said, his institution is providing the space for ordinary citizens to contribute and participate in their democracy, and to hold their elected leaders accountable on campaign promises made.  Please click link to read/ download the full report.. President Weah Two Years Performance Report 2018-2020-01.