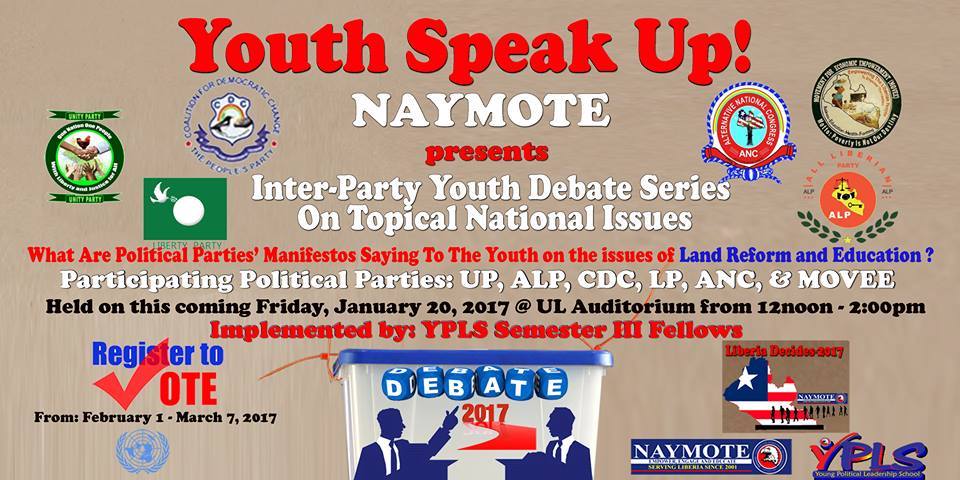 Young people aged 18-32 years constitute 55% of the 1,903,229 registered voters in Liberia currently. The dividends of their participation in decision-making and political processes are lacking. The challenges they face are unprecedented, ranging from the lack of basic social services to unemployment, multiple forms of inequalities and exclusion. By all indications, their votes will obviously make huge impact in the October 2017 elections.

Against this backdrop, 500 young voters from across Montserrado County will participate in a one-day inter-party youth debate series on topical national policy issues including land reform and education at the University of Liberia main campus on Capitol Hill on January 20, 2017 at 12:00 noon.

Organized by the Naymote Partners for Democratic Development through the Young Political Leadership School (YPLS) graduates, with support from the United Nations Mission in Liberia (UNMIL), the first debate features four leading political parties including the Unity Party, Liberty Party, Alternative National Congress and the All Liberian Party.

At the end of these debates, the positions of these young debaters from the political parties on the issues under discussion will be documented and used to strengthen political parties’ manifestos and enable NAYMOTE and the larger Liberian populace to hold the winning party and other candidates accountable to the voters to fulfill their campaign or party platforms.

The US Based International Campaign Fellow and the Press Union of Liberia (PUL) Regional Coordinator, Clarence Jackson will moderate the first debate series.